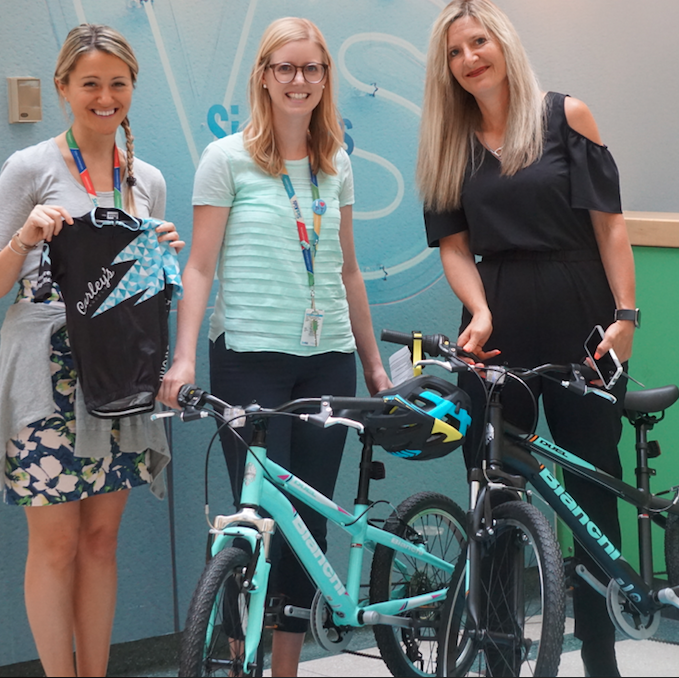 This was the very first year we had run the winter tune-up. With not too many expectations we were just happy to have our trusted sponsor presenting the event and some of our die hard cyclists on the start list! But, our our presenting sponsors “The 11 Inc” decided to kick up a notch by generously donating an $800 gift card to their store so that the Carley’s Angels Foundation could not only benefit from registration and merchandise sales, but from a pretty sweet door prize too!

So the event commences and as always our Carley’s Angels supporters did not disappoint, we raised well over double what we had expected but the best part was yet to come.

With many avid cyclists in the crowd we were sure the $800 gift card would be highly sought after. As it was. When the name was pulled however there were sad faces on every single one of the avid cyclists. Allison Posen emerged from the crowd as the winner! A friend of both Sammy and Riley Allison that they met through their love of horses.

A few days later Allison called the Carley’s Angels Foundation with an idea. What if the $800 gift card could be used to purchase a kids bike to donate to a cancer patient at sickkids?

Thanks to the continued generosity of the 11, Allison was able to turn her gift card into 2 bikes for 2 deserving cancer patients at SickKids. She also purchased helmets and 2 Carley’s Angels kids jerseys to include in the gift!

Emma, had the most beautiful note to share. “When we were given news about a second bike I knew the boy right away. He came in the day after his 4th bone marrow transplant and his spirits were low. The moment we told him about the bike everything changed, he started to smile and didn’t stop! His parents said this will be his very first bike and they could not be more thankful for this perfectly timed gift”

Thanks to the generosity of Allison and The 11 Inc, a little boy and girl who have battled cancer will now be able to enjoy a true summer moment of being a kid on their brand new Bianchi Bikes!

We’d also like to give a shout out to our long time sponsor The 11 Inc for their unwavering support of our Mission!