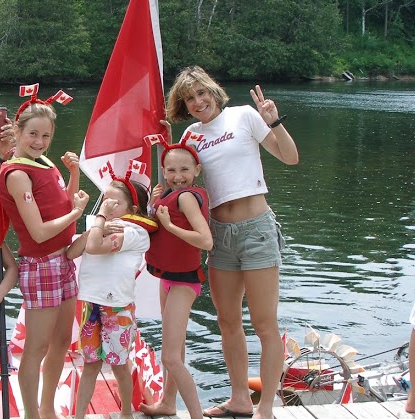 Before the pages of “Always Smile: Carley Allison’s Secrets to Laughing, Loving and Living”, before the Cancer diagnosis and before she inspired hundreds of thousands of people, there was a fierce little girl named Carley Elle Allison.

Every Canada Day when we were little our parents would pack up the family and our Jack Russell, Jack and drive north to Carley’s all-time favorite place, Gull Lake.

As a kid you just assume every family is the same as yours, they do the same activities, eat the same food and have the same traditions… But, looking back at your childhood you realize that is not the case at all. As an adult, I now realize our Canada Day traditions were a little unique.

We used to spend Canada day participating in what was called “The River Raft Race”. Now for anyone who has gotten to know our family, having “race” in the title of the activity we participated in was not surprising at all. But this wasn’t your average race, but don’t worry we did lots of those too. This was a race down the Gull River on a completely DIY (do it yourself) raft decked out in as much Canada Gear as humanly possible.

See photo below for reference…

When we were smaller our Uncle and Mom would join us in the water, pulling and directing the raft, but as we got older James and Jeff took over this role. The little kids would stand on the raft cheering and the older ones would wear flippers and kick in the water to propel the DIY raft down the river at a not so blistering pace.

So Carley, well she was the size of one of the little kids but as most of you know she didn’t act like she was.

We tried every year to convince her to stand on the raft because at 60 lbs she wasn’t going to accomplish much in the water. But Carley had other ideas.

She managed to convince the older kids (and parents) that she could do everything we could. And better might I add. She donned the tiniest flippers you’ve ever seen and jumped in the water, never afraid of a challenge. And so she pushed the raft down the river with Jeff, James, and I. And I promise you she never admitted that when the race was over she was totally and completely exhausted. She made it look easy and persevered… As always.

That’s how she always tackled things. It didn’t just arise when she was diagnosed with Cancer, she was always brave, fearless and determined. We were just lucky enough to see it, well before she was the Carley you all got to know. Not every hero starts off with a remarkable act of bravery, some are cultivated over time. And it was small acts like these time and time again that made Carley into the extraordinary young woman who battled cancer in the most inspirational way.

Click here to learn more about how we are honouring Carley’s Legacy, to make a donation or get involved.